World Hope is set up to work in many countries. The head office is in Australia.  Each country has its own registered branch, with a local board and local staff.

World hope is a non-religious humanitarian Aid organisation that exists to give hope to this world by helping people.

World hope is involved in disaster relief, humanitarian aid, community development and education.
World Hope will help anybody in need independent of religion, race, gender or status.
The unique thing about World Hope is that everybody that works with World Hope Network is a volunteer.  No money is given to staff and all money raised is directed to the project at hand.

As World Hope Welfare Network is part of an international Aid Organisation, the organisation is run in accordance with strict international guidelines and reporting requirements. All money is directed towards the relief of poverty and suffering and cannot be used for profit or the gain of any one individual.  Organisational policy is compliant with guidelines as set out is the Federal Parliament of Australia Charities Act. 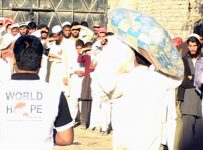 Aid to 300 families in the North West of Pakistan

The Australian CEO and Vice CEO joined with World Hope Network’s Pakistan team, to distribute 600 blankets and 300 family kits to flood affected families in the North-West Frontier region of Pakistan. Officials believe that World Hope Network is the first charity / humanitarian aid organisation to distribute aid in this particular village. The guys travelled with a team of 12 volunteers to the village of Mian Isa, north of Nowshera in the north west province of Kyber-Pakhtunkhwa, Pakistan. The town is situated on the bank of River Kabul. 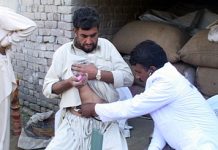 Also joining the team for the distribution was Dr Slamth Masih Gill. Dr Slamth’s medical clinic was able to provide medication for diahorrea and other ailments as well as simple pain relief and advice / referrals for further treatments.

World Hope would like to thank the elders and families of Mian Isa for their cooperation and hospitality. Even though we came to give, the villagers organised tea and biscuits and extended their appreciation and willingness to also give for World Hope’s visit to their village. 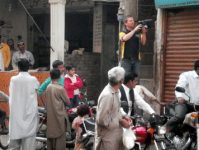 Whilst in Pakistan, World Hope filmed footage for a documentary on the situation 3-6 months on from the floods, and the work we with our Pakistan team are doing in the Northern provinces. 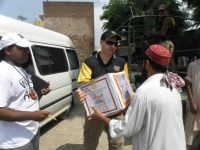 Flood aid is continuing to get into Northern Pakistan

World Hope Welfare Network, Pakistan has just distributed a number of kits into some of the hardest hit areas.

The people are desperate and in serious need. Help us and our local partners show love and provide family kits to these desperate people.

To do so, simply click on the donate button and follow the paypal prompts. Please include reference “PKFLOOD” with all donations. Alternatively you can make a direct deposit or send a cheque as detailed above. 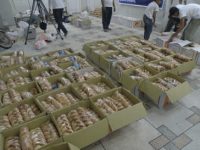 A point of difference with World Hope Network, is that we have a permanent arm to our operations, with a Pakistani team in based in Lahore, extending into Peshawar. This fact combined with relief effort experience with the 2008 Pakistan earthquake in Balauchistan and aid in our 2009 relief effort into the Swat Valley, means that we can provide our team in Pakistan with emergency aid.  Then they, combined with hundreds of local volunteers, are able to get the aid to where it is most needed with immediate effect. 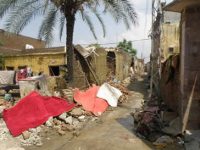 The worst floods in the region for 80 years have killed at least 1,600 people and affected about 14 million, with fears that diarrhoea and cholera will spread among the homeless. Officials say 650,000 homes have been destroyed, 1.4m acres (557,000 hectares) of crop land has been flooded across the country and more than 10,000 cows have perished. The immediate priorities for survivors are clean drinking water and medical assistance. Authorities are expecting the death toll to rise, as more of the heavy monsoon rains that have lashed the area for the past week have been forecast. Prime Minister Gilani called the flooding the worst in Pakistan’s 63-year history. In an appearance on national television he appealed for international help.
“I would ask the international community to support and help Pakistan alleviate the sufferings of its flood-affected people.”

Many aid agencies have launched appeals after thousands of people were left stranded in Pakistan by the worst floods there in 80 years…., World Hope Network is doing the same.

World Hope’s CEO will be travelling to Pakistan to join up with our Pakistan arm (World Hope Welfare Network) from August 11th, and together they will plan and prepare an immediate response to families who urgently need our help. 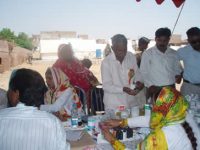 World Hope participated in a Medical Mission to a recent war zone area. On 19th September, volunteers of the World Hope team travelled 4 hours to GOJRA, a city of Toba Tek Singh District in the Punjab province of Pakistan. The events of the day started with Pakistani songs of Praise, then prayer for the persecuted people. Many Pakistani people lined up in need of medical care. World Hope with the assistance of four nurses distributed medical aid. It was a day of great blessing. The local people were filled with joy and love as they witnessed merciful and compassionate acts. 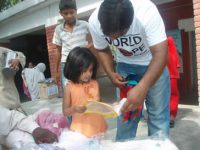 After the success and completion of the earthquake relief effort to Baluchistan Pakistan, World Hope initiated another relief effort to continue to provide ways of bringing HOPE to the Pakistani people in need through a second Swat Relief effort. On 10th July 2009, Volunteers of the World Hope team under the leadership of national president Arif Ashiq left for the very troubled and dangerous Swat Valley area (North West Frontier Province of Pakistan), where the Pakistani government began a military offensive to regain control of this region from the Taliban. The team visited different camps in the town of Murdan where they distributed aid relief to the community. Many are still suffering from the Taliban insurgency where education has been banned for girls and more than 170 schools have been bombed or torched along with other government-owned buildings. Thousands of people have left their homes, and everything that they own to escape the battle of the Swat. 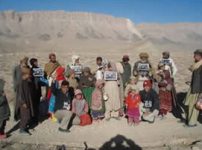 During  February 2009 World Hope went to Quetta Baluchistan in the West-South of Pakistan to distribute aid in the form of food, medical kits and children’s kits to many of the thousands of people who were affected by the earthquake that struck last October.
After 28 hours traveling by train, the team arrived in province Balochistan. There we met our local contacts and left from Quetta to affected area with relief kits.

World Hope Network has only started to scratch the surface when it comes to helping the earthquake victims. There are still hundreds of people who are waiting for help.
World Hope’s step is just like a one drop of water in Great Ocean and we believe that oceans are made when drops of water come together. 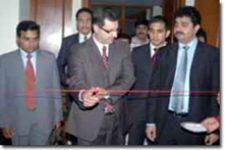 On Tuesday night the 22nd, at the Avari hotel a new Agency was birthed.  Present at the opening ceremony were senior ministers of parliament, business leaders and other leaders from various community groups.  The night was very successful, with plenty of time for dinner and discussion.
In his address to the attendees, the international director and CEO of World Hope worldwide, Mr Daniel Zelli, said “It has been my experience in working with some of the poorest countries of the world, that until the people in that country start to take responsibility for their country, the country remains poor.  It is a new day for Pakistan.  It is a day of positive reform.  Do not depend on the West, do not depend on your cousin countries, and don’t look abroad, look from within Pakistan.  Pakistan must save Pakistan.”
Many present were very moved with this new vision.  Mohammad Prevaiz Malik (Ex-National Assembly PML (N)) said, “At last somebody is talking some sense”.  At the conclusion of the night, Mr Haji Ehsan-UD=Din Qureshi (Minister For Religious Affairs & Auqaf Punjab) said to the “I pledge my support.”
Kamran Michael (Minister for Human Rights & Minorities Punjab) a key supporter and liaison with the government ministers said, “It is my privilege to help get this agency started.  This is a good thing for our communities” 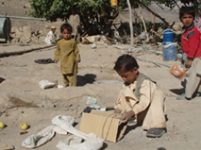 Families, children and communities are still suffering from the effects of the Baluchistan earthquake. On October the 29th 2008, the earthquake took 300 lives.  Now there are 70,000 (15,500 families) people still homeless, 30,000 of those being children. Pakistani officials have been reported to have said, “We are concerned about the urgent need of children and women”.
Due to slow responses of Aid to the area, freezing temperatures and the lack of safe water, the situation is escalating.  Health authorities report “children are especially vulnerable to diseases such as diarrhoea and cholera.
Whilst the world may have forgotten and Pakistan is getting on with daily life, there is a small group of volunteers who have not forgotten the 70,000 victims.
A newly formed Humanitarian Aid agency called World Hope Welfare Network is taking responsibility to do something positive for Pakistan. The National President Mr Arif Ashiq said, “even though we have only just formed and are very young, we couldn’t let desperate people suffer.  We had to do something”